In 1849, Joseph Monier, a French gardener, invented reinforced concrete. Monier was not the first to experiment with iron wire and embedded iron mesh in concrete. However he enhanced this invention significantly. Then he revealed his innovation with gardening troughs at Paris Exposition of 1867, and patented it in the same year. Soon he expanded and found new uses for this material in various engineering applications, marking the history of concrete construction. Consequently, he earned several patents in iron reinforced elements and structures such as pipes in 1868, facades in 1869, bridges in 1873, and beams in 1878.

Monier’s name is also notable in the history of concrete bridges. In fact, he designed the first ever iron reinforced concrete bridge in the Castle of Chazelet in 1875. Indeed, Monier’s patented designs showed that he very well knew the basic concept of reinforced concrete – the concrete in the compression zone bears the compressive stresses, and the iron reinforcements in the tension zone bear most of the tensile stresses, where both materials perform as a unit.

In 1889, Ernst L. Ransome built the first reinforced concrete bridge in America, The Alvord Lake Bridge. This arch-shaped bridge spans 6.1 meters, with a width of about 20 meters. He reinforced the bridge with square twisted steel bars. Specifically, he embedded these bars near the bottom of the arch and bent almost in the same curve.

In 1891, George Bartholomew poured the first concrete pavement in the United States. Remarkably, parts of this pavement are still in service today. This 2-layered pavement was about 15 centimeters thick, having a compressive strength of about 55 MPa.

In 1902, August Perret designed and constructed a steel reinforced structure in Paris consisting of several apartments. He designed this building as a concrete frame structure. In fact, it was one of the first buildings to have visible structural elements such as beams and columns. At that time, engineers did not design concrete residential structures in a similar way, but only industrial structures. However, this building had no bearing walls, and it was architecturally appealing with a stylish facade. Hence, it increased the social acceptance of such residential structures, and became notable in the history of concrete construction.

The first high-rise structure in the United States

Another remarkable highlight in the history of concrete was in 1904, when Elzner and Anderson designed the first reinforced concrete high-rise structure, The Ingalls, in Cincinnati, Ohio. This building is 64 meters high and consists of 15 stories. To illustrate, the highest building was only about six-story high at that time. Thus, many believed that the Ingalls building would collapse under its own weight or wind loads as soon as the shoring was removed. However, it still stands at Fourth and Vine till date.

The history of concrete bridges in Italy: The Risorgimento Bridge in Rome

In 1911, engineer Giovanni Antonio Porcheddu designed the first reinforced concrete bridge in Rome, The Risorgimento Bridge. It linked “Piazzale delle Belle Arti” and “Piazza Monte Grappa”. Similarly, during the removal of the supporting scaffolding, spectators doubted that this structure would remain erect. However, the engineers were very sure about the effectiveness of this method in construction, which was an innovation at that time. In addition, Giovanni Antonio Porcheddu attended the removal of the scaffolding with his two youngest kids on a boat just under the arch of the bridge.

A highlight in the history of ready mixed concrete: The first ready-mixed concrete delivery in the United States

In 1913, the first ready-mixed concrete was delivered in Baltimore, Maryland, and it was hand mixed. About four years later, the American Society for Testing and Materials, ASTM, set standards for Portland cement based mixtures.

Another major highlight in the history of concrete remarkable: The invention of pre-stressed concrete

A remarkable technological milestone with the invention of air-entraining agents

In 1930, air entraining agents (AEA) were invented, marking the history of concrete construction materials. This type of admixtures is beneficial to the workability and durability, especially for concrete subjected to freeze and thaw cycles. Specifically, it creates intentionally entrained amounts of air in the form of uniform microscopic air bubbles in a concrete mixture.

A notable structure in the history of concrete construction: The first concrete dam 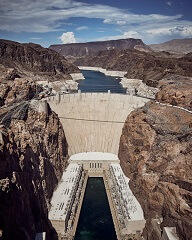 In 1936, the first concrete dam was built, the Hoover dam. It is a concrete arch gravity dam in the Colorado River between Nevada and Arizona. The dam has a thick base, about 200 meters thick, and a relatively narrow top, about 14 meters thick, convexed towards the water. However, this mass concrete could have caused serious problems if not properly casted and cured. Thus, the concrete pouring was divided into blocks, having steel pipes embedded, which pass cool river water to overcome the heat of hydration problems of mass concrete. Then, after each block cured, the steel pipes were filled with grout. Besides, the construction of this unmatched huge structure at that time led to many innovations in the construction industry. In addition, it became one of the main highlights in the history of concrete and mass concrete.

In 1963, architect Max Abramovitz designed the first concrete dome-shaped sport structure, The Assembly Hall, in Urbana, Illinois. The Assembly hall is about 39 meters high, with a dome spanning 122 meters. Max Abramovitz designed the dome as ribbed reinforced concrete in a folded-plate shape that narrows till about nine centimeters in thickness. In addition, engineers used pre-stressed concrete in the Assembly Hall in a way that was never used before. Furthermore, the dome was placed on a ring beam that was pre-stressed by wrapping about 988 kilometers of 6.35 millimeters of highly-tensioned steel wire around it, which made it self-supporting.

The introduction of fiber-reinforced concrete

In about 1970, fiber reinforced concrete was introduced. Russian, British, and American researchers conducted studies on this type of concrete since early 1950’s. The main early research was on glass fiber reinforced concrete. However its development was very slow. Nevertheless, the first use of fibers may be dated back to the early 1900’s with asbestos fibers, and even back to the Roman Empire with the use of horse hair.

In 1989, engineers used the “highest strength concrete” in the construction of a 243 meters high building, The Two Union Square, in Seattle, Washington. Remarkably, this concrete achieved a compressive strength of 131 MPa and an elastic modulus of 41 Gpa. However, in order to attain such properties, engineers carefully chose and tested the constituent materials. Besides, the mixture incorporated supplementary cementitious materials, admixtures (set retarders and superplasticizers), and high quality aggregates.

In 1990, the 311S Wacker Drive in Chicago set the world record for the highest structure at that time, thus marking the history of concrete and high rise structures. Even, this record remained unbroken for more than a decade. To illustrate, the 311S Wacker Drive is a high-rise reinforced concrete structure standing at 295 meters high. Also, the highest concrete strength used in this building is about 83 MPa. Furthermore, engineers designed this structure as a modified tube with reinforced concrete peripheral frame, steel columns, and composite post-tensioned floor slabs. In fact, this design gave the structure an equal relative stiffness of all structural elements for the whole height of the building.

The introduction of polished concrete in the United States

The launching of LEED program

In 2000, the United States Green Building Council launched Leadership in Energy and Environmental Design program, LEED. This program provides third party verification of green and eco-friendly buildings. Also, it uses a rating system that inscribes various building types and every phase of a building’s life-cycle. Hence, this rating helps projects to earn one of LEED’s certification levels, certified, silver, gold, or platinum.

One of the remarkable “Green” highlights in the history of concrete construction: The Solaire

In 2003, the first eco-friendly high-rise structure in the United States, the Solaire, was constructed. In fact, this tower used several environmentally friendly methods that made it unique. These methods include maximizing daylight, use of vegetation and storm water, use of natural gas-fueled HVAC system, use of photovoltaic panels, and reduction of the urban heat island effect – an urban area that is much warmer than the adjacent rural areas due to human activities and modifications of land surfaces. Consequently, the Solaire consumes 35% less energy and requires 50% less potable water.

The invention of translucent concrete

In 2004, Aron Losonczi, a Hungarian architect, invented translucent concrete through the addition of special fibers. The main purpose of this type of concrete was to combine the strength properties of normal concrete and the translucency of glass. Hence, Aron Losonczi used special light transmitting fibers in addition to the basic constituents of concrete, in order to achieve the desired properties. In fact, such fibers were developed from a type of fibers that was widely adopted in the communication and sensing fields.

In 2016, the first three dimensional concrete printed building, the Office of the Future, was constructed in Dubai. The 3-d printed office is a fully functional building designed for the United Arab Emirates National Committee. In fact, the parts of this structure were printed in China and shipped to Dubai.

Where, How, and When Was “Concrete” Invented Industrial Revolution and Manufacturing Methods of Cement