What is an artificial pozzolan

Unlike natural pozzolans, artificial pozzolanic materials are industrial by-products or materials that have undergone processing or heat treatment. Such processes modify their chemical and/or physical structure. 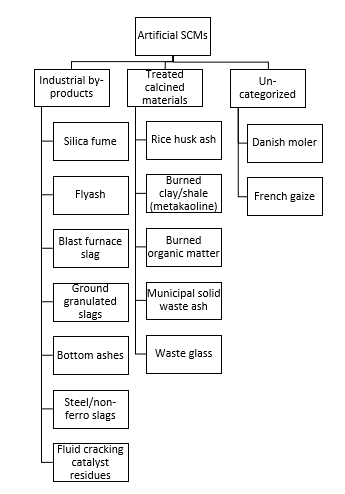 What is silica fume?

It is the by-product of the manufacturing process of silicon metal and ferro-silicon alloys. During this process, the burning of pure crystalline silicate, in the form of quartz, at temperatures exceeding two thousand degrees Celsius reduces it into silicon. In addition, this high temperature produces silicon dioxide vapor, which eventually oxidizes and condenses to form silica fume.

Silica fume consists of very fine spherical particles, mostly finer than 45 microns. As a result, it has a relatively high surface area, typically between 15,000 and 35,000 meters squared per kilogram. Thereby, silica fume is about hundred times finer than cement. Also, its color ranges from dark grey to white, depending on the content of carbon and iron, and on the processing temperature. 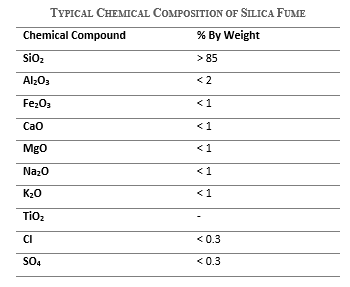 The advantages of silica fume in concrete

Silica fume is usually used either as an additive in concrete, added to the mixer as a partial replacement of cement, or as a material used in the production of composite or pozzolana cement. In brief, it can improve various concrete properties when used properly. In addition, the chemical reaction of silica fume modifies the microstructure and enhances the mechanical properties and durability of cement based composites. Specifically, amorphous silica reacts with calcium hydroxide, one of the main hydration products of cement, to produce additional calcium silicate hydrate gel, which is the main contributor to strength development of concrete. Moreover, silica fume contributes to the packing density of a mixture and reduces the wall effect between the cement paste and aggregates in the interfacial transition zone.

What is fly ash?

It is the by-product of the combustion of pulverized coal in coal-fired steam and electricity-generating plants.

Based on its chemical composition, fly ash can be classified into two classes, F and C. The main difference between class F and class C is the calcium content. Class F usually has less than ten percent calcium oxides, whereas class C has more than twenty percent. In addition, the former group consists of particles that coated with a melted glass-like material. This significantly improves its resistance against sulfate attacks. However, class C fly ash is usually used in concrete in higher dosages than class F, and is more commonly used in structural applications.

Fly ash mainly consists of silicon dioxide, aluminum oxides, iron oxides, calcium oxides, and several minor oxides. The typical differences in the chemical composition of both classes of fly ash are as follows.

It is a by-product of the extraction process of iron through a blast furnace at high temperatures of about about 2000°C. Consequently, the temperature transforms iron ore into molten iron, which sinks to the bottom of the blast furnace. Hence, the impurities, or slag, in the molten iron float to the surface. Then, this slag passes through the process of removing or draining, cooling with water or air, drying, and grinding to fine powder. Hence, the end product is an amorphous material that owes cementitious properties. 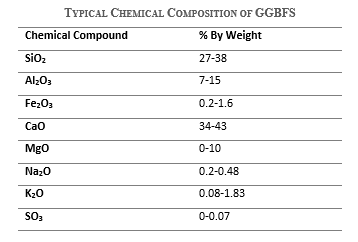 GGBFs is a common supplementary cementitious material that improves various concrete properties. Specifically, it has a slow strength development rate, thus giving concrete low early but higher long term strength. In addition, it reduces the heat of hydration, and improves the packing, durability, workability, and sulfate and chloride attack resistance of concrete.

What is bottom ash?

It is an incombustible granular residue produced from incinerators, boilers, power plants, and furnaces. It is usually about the same size of sand, which is much coarser than fly ash. Bottom ash can be used either as a raw material in the production of cement, or as a partial replacement of cement, sand, or aggregates, depending on its particle size and pozzolanic activity. Bottom ash mainly consists of calcium, silicon, iron, and aluminum oxide.

It is the by-product of processing non-ferrous metals from natural ores, and is in the form of granular or rock-like material after cooling. In addition, non-ferrous slags mainly consist of calcium, silicon, aluminum, and ferrous oxide. However, the properties and the chemical composition may differ, depending on their type.

It is a by-product of the fluid catalytic cracking operation in petrol refineries. It mainly consists of fine spherical particles, with average size less than fifty microns. Fluid cracking catalyst residue is a highly pozzolanic material, and mainly consists of silicon and aluminum oxides.

What is rice husk ash? 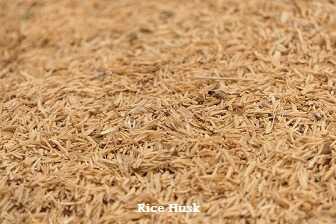 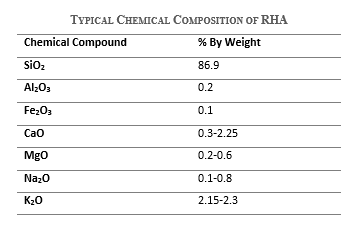 Rice husk ash can reduce the heat of hydration and the permeability of concrete, in addition to enhancing the resistance against chloride and sulfate attacks.

The regulated burning of natural minerals at temperatures between five hundred and eight hundred degrees Celsius can produce calcined clay, burnt shale, and metakaolin. For example, burning pure natural kaolinite clay at a temperature of about 800 degrees Celcius produces Metakaolin. In brief, these materials mainly consist of silicon and aluminum oxides.

The controlled burning of agricultural residues at specific temperatures and time produces this treated artificial pozzolanic material. In fact, the burning process decomposes the organic carbon and increases the concentration of silicates, which produces a highly pozzolanic material. In brief, burned organic matter residues usually have a high water demand due to their high specific surface area and rough surface texture.

The incineration of municipal solid wastes produces two main by-products, bottom ash and fly ash. These ashes have a more complex chemical composition than coal ashes. However, municipal solid waste ash usually consists of silicon, aluminum, and sulfur oxides. In addition, it may have a high concentration of metals such as mercury, lead, arsenic, zinc, cadmium, and others having high concentration of soluble salts. Thereby, a proper treatment is necessary before its application in the concrete industry.

How is glass made?

The primary raw material used in the manufacturing of glass is sand. Sand, which is mainly composed of silica, is heated till it turns into liquid sand, at about 1700°C, and then allowed to be cooled down and shaped.

The chemistry of glass

During this process, liquid sand undergoes microstructural transformations, and never returns back into a solid form even after cooling down. Instead, it becomes a frozen liquid, also known as amorphous solid. Some materials are usually added to liquid sand in order to alter some properties or change the color of the final product.

Waste glass is usually used in concrete in various forms and compositions. The non-recyclable glass waste is treated, cleaned, crushed, and/or ground, before its incorporation in concrete.

Glass powder is considered pozzolanic when used as a supplementary cementitious material in the proper particle size, usually less than 75 micrometers. Furthermore, it is mainly composed of amorphous silica despite its various types produced, such as silicate, soda-lime, borosilicate, lead, and alumino-silicate glass.

Definition and Classification of Admixtures for Concrete

Definition and Classification of Aggregates