What is concrete slump?

Slump is a measurement of consistency of fresh, plastic, and cohesive concrete. In essence, it is a workability quantification that checks the consistency of a batch and defines how workable a certain concrete mixture is. Specifically, it measures how much a fresh mixture, placed in a cone-shaped mold of certain dimensions, “vertically slumps” after the removal of the mold. Hence, the higher the slump, the more workable the concrete is.

The importance of slump in concrete

Slump is one of the most commonly used workability parameters. It is often considered when proportioning or designing mixtures, when specifying concrete, and when ordering it. Besides, slump can be easily measured on-site and in the laboratory.

How to measure concrete slump?

The slump of concrete can be determined in accordance with standard test methods. These mainly involve filling a cone-shaped mold of specific dimensions with fresh concrete, then measuring the subsidence after the removal of the mold. 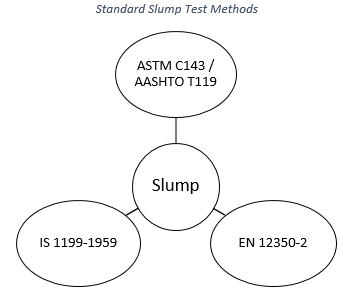 The main standard test methods include the following:

In fact, these methods are basically similar to each other with only minor differences.

Comparison in the slump test procedures between standards

On one hand, as for the main similarities, ASTM C143, AASHTO T119, EN 12350-2, and IS 1199-1959 all use cone-shaped molds of the same dimensions, same rod diameter, and the number of strokes with the tamping rod. Thereby, their basics are quite the same. In addition, it is important to note that the ASTM C143 and the AASHTO T119 are basically similar.

On the other hand, there are some minor differences when it comes to the timeframe for lifting the mold, timeframe for the test completion, point of measurement, acceptance of the results, and number of placement layers.
First, ASTM C143 and AASHTO T119 specify a 5-second timeframe with a tolerance of 2 seconds to completely lift the mold. Hence, the acceptable timeframe is 3-7 seconds. Whereas, EN 12350-2 specifies a window of 2-5 seconds, and IS 1199-1959 does not address this timeframe.
Second, ASTM, AASHTO, and EN specify that the test should be completed, from the time of filling the mold till its removal, uninterruptedly within 2.5 minutes. Whereas, this value is only 2 minutes in the IS standard.
Third, ASTM and AASHTO consider the slump measurement to the displaced original center of the top surface. Whereas, EN and IS consider the highest point measurement.
Fourth, ASTM, AASHTO, and EN state that if a portion of concrete shears off the pile, in two consecutive tests, then the results should be disregarded since the mixture does not have the required plasticity and cohesiveness for the test to be applicable. Whereas, the IS still considers the second measurement while noting that the specimen had sheared off.
Fifth, ASTM, ASHTO, and EN consider the placement of concrete on three layers. Whereas, the IS considers it on 4 layers.

For choosing the slump, we will be referring to three standards:

The BS 8500 classifies slump ranges into five classes, S1 to S5, in which they slightly vary based on the sampling method. However, unlike the ACI 211.1 and IS 456, this standard does not provide guidance for the selection of slump based on the type of construction.

What influences the slump of concrete? 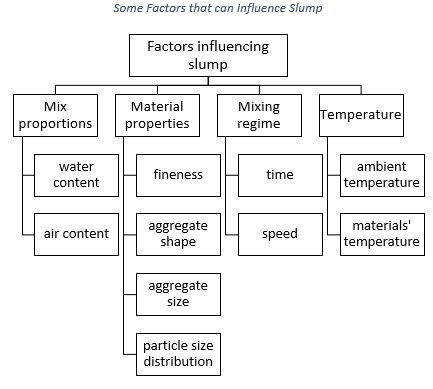 There are numerous factors that can influence the slump of concrete. Basically, the above figure illustrates some of these factors which are related to the mix proportions, properties of constituent materials, mixing regime, and temperature.

The mix design and proportions of the materials have a major effect on the slump. For example, the water content or air content are directly proportional to concrete slump. To illustrate, as the water or air content increase in a certain mixture, the slump increases, and vice-versa.

Also, the properties of constituent materials can have a significant influence the slump. These include the fineness of cement or other binding materials, aggregate shape and size, and particle size distribution.
For instance, as the fineness of binders increases in a certain mixture, the slump generally decreases.
In addition, the shape and size of aggregates play a major role. For example, round aggregates usually increase the slump, whereas sharp-edged aggregates can decrease it. Also, larger aggregates have a smaller surface contact area, which can increase the slump.

The mixing regime can also affect the slump of concrete. For example, vigorous mixing can entrap air, which we previously addressed its effect on the slump, however it can increase the temperature of the mixture.

Likewise, temperature is also a major factor. In brief, as the temperature of air, ingredients, or the mixture increases, the slump generally decreases.

The relation between concrete slump and strength is generally inversely proportional, when the effect of admixtures is disregarded. This is mainly due to the fact that the slump and water content are directly proportional for a given mixture. Besides, the ASTM C143 states that these relationships are generally correct in laboratory conditions, but not clear and consistent under field conditions. However, this can be explained since there is not as much control on various conditions in the field as in the laboratory. To illustrate, a mixture with higher slump can be easier to place and compact than a similar mixture with lower slump, which can explain the inconsistency of some field results, for example.

5 Terrible Concrete Sealing Mistakes You Should Avoid Types of Concrete Joints: All You Need To Know